2019 was characterized by rampant multiple expansion and momentum in large cap stocks.  Prices went up, but earnings didn’t really go anywhere.  The turn of the calendar, while merely symbolic, does cause people to rethink things a bit.  It resets momentum and can restore order.

I believe 2020 will be characterized by a return of fundamental focus.  Stocks can continue going up, including the big winners of 2019, but to do so it will require fundamental performance.  Similarly, the downtrodden stocks of 2019 have the opportunity to win investors back with strong fundamentals.

Valuations got a bit out of whack in 2019, so we are looking to capitalize by owning the positions that represent the greatest disparity between market price and intrinsic value.

Despite being an up-year, 2019 was a fearful bull market.  Anything that smelled risky was left in the dust.  In the REIT world, this meant hotels, corrections and retail, all 3 of which drastically underperformed the index.

I believe the market is wrong on 2 of the 3.  Hotels are genuinely risky, with labor costs and industry structure presenting significant and long-lasting problems.  While the prices have gotten enticingly low, we are keeping an underweight in hotels.

Unlike hotels, the threat to corrections is just rhetoric at this point.  The corrections sector is experiencing rapid growth and the REITs are well positioned to capture the growth.  Things could go wrong if a series of unlikely events all go the wrong way, but this risk is overly priced into the stocks.

Retail, or more specifically malls, seems to be one of the most feared places in the market.  Some people think I am crazy to be bullish on a sector that has done so poorly, but that is precisely why I am bullish.  Market prices have gotten outrageously cheap with an extreme degree of pessimism already priced in.

While fundamentals are somewhat weakened, the price drop is entirely disproportionate to the fundamental drop.  Macerich, for example has continued to grow its sales per foot and rental rates, yet it has dropped from over $90 to under $26. WPG’s FFO/share has dropped a bit, but its price has dropped so extremely that it now trades at about 3X trough FFO.  Consensus estimates are calling for 2020 to be slightly higher, meaning the bottom is already in yet it still trades at a going out of business multiple.  PEI is opening up freshly renovated properties including the widely acclaimed Fashion District.  With these openings, revenue, FFO/share and AFFO/share should be on the rebound.  The REIT is now in growth mode, yet it is priced for collapse.

A subscriber asked about WPG’s dividend safety and I’m happy to talk about this topic because it is likely top of mind for many.  I would like to expand it, however, to the dividend safety of mall REITs in general.

Bears are calling for dividend cuts at most of the mall REITs, but particularly at MAC, WPG and PEI.

Among REITs, dividend cuts have a terrible connotation as being value destroying, but I want to emphasize that dividend policy in general is value neutral.  If a company has cashflow of $1.00 per share, that $1.00 accretes value for shareholders whether it is paid out or reinvested in properties.  Thus, the dividend cut itself does not hurt shareholders.  It merely means that instead of getting cash, their shares are going to be worth more as the capital went toward properties that the shareholders own.

All 3 mall REITs have massive short interest and the shorts are acting as harbingers foretelling the doomsday when the dividends are finally cut.

Some of the REITs may cut their dividends at some point, but it is hardly doomsday.  The cuts may actually be healthy.  If the REITs can deploy the capital in such a way as to turn around their property portfolios, it is a win for shareholders.

None of the 3 common stock malls we hold in 2CHYP have to cut their dividends.

Some of them may choose to cut, feeling like reinvestment in properties is a better use of capital.

All 3 mall REITs are on the cusp of a fundamental turn around.  MAC and PEI are very close, potentially getting positive growth in both NOI and FFO this quarter.  WPG is a bit farther off, but we still anticipate positive growth in the 2nd half of 2020.

It is possible the stocks will sell off if/when the dividend is cut, but there are also instances of a relief rally after a cut.  I try not to focus on the near term price movement and instead on the long term fundamental value.  FFO/share is the important number here in my opinion.  Dividend policy is merely the allocation of that cashflow and the cashflow benefits shareholders whether it is paid out or not.

Best of luck investing in the New Year. 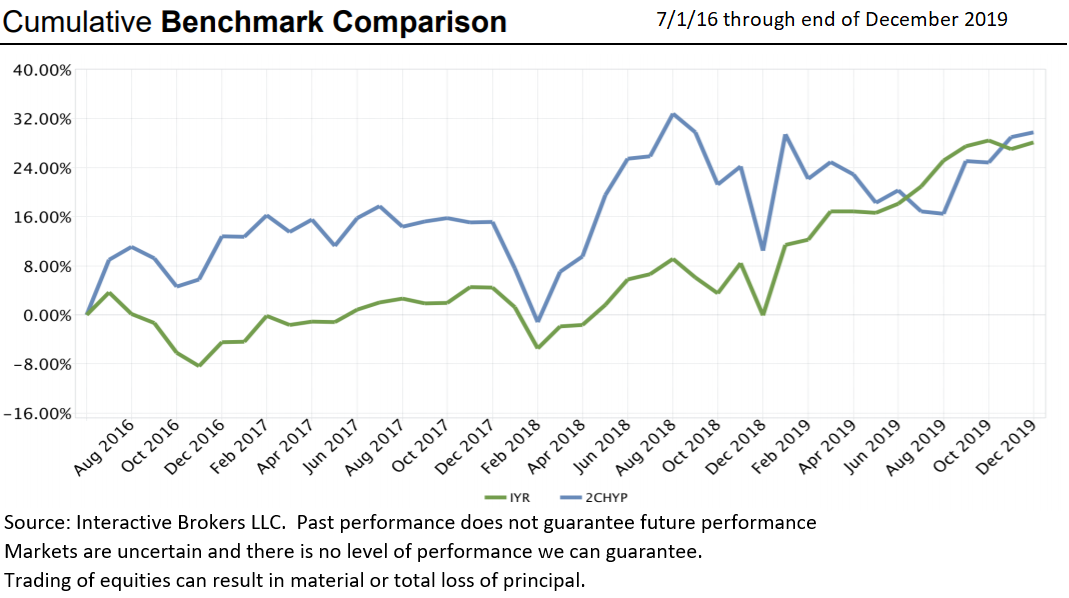